Economy and Industry in Dorset

The principal industry in Dorset was once agriculture but this has become less profitable and the industry has declined. In 2009 there were 2,340 armed forces personnel stationed in Dorset. The military presence has had a mixed effect on the local economy, bringing additional employment for civilians, but on occasion having a negative impact on the tourist trade, particularly when popular areas are closed for military manoeuvres.

Dorset’s three ports, Poole, Weymouth and Portland, and the smaller harbours of Christchurch, Swanage, Lyme Regis, Wareham and West bay generate a substantial amount of international trade and tourism. When the waters around Weymouth and Portland were chosing for the ailing events in the 2012 Summer Olympic Games, the area underwent an increased investment in infrastructure and a growth in the marine leisure sector. It is expected that this will continue to have a positive effect on local business and tourism.

RoofTech supply professional roofing refurbishment services within the southern counties of England, with Dorset being covered by one of our skilled surveyors.

Over the years, RoofTech have undertaken various sheeting, flat-to-pitch and gutter refurbishment projects for large aviation companies, manufacturing companies, merchants and an international electricity and gas company, to name but a few. 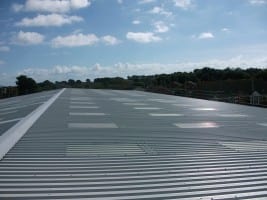